Kapha dosha is made up of the energy of Water and Earth. In Sanskrit, the term Kapha comes from “ka” meaning water, and “pha” meaning to flourish – that which flourishes by water. Kapha dosha creates stability, moisture, and the ability to reduce friction, as evidenced in physical lubrication and emotional compassion and endurance.

The qualities of Kapha are heavy, slow, dull, cool, oily, slippery, dense, soft, and static. Kapha in the body governs lubrication, structure and support. As a set of priorities, it is relatively underappreciated (and underdeveloped) in our culture, especially in comparison to the overly celebrated multitasking of Vata and intense drive of Pitta. 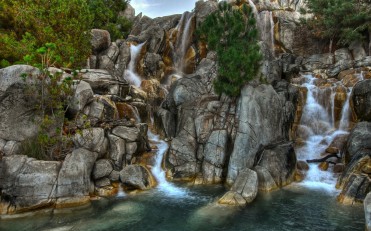 Kapha qualities are expressed in strong muscles and big bones, sluggish metabolism, slow speech, clammy or oily skin, the protective mucus in the gastrointestinal tract, luxurious thick hair, a firm mind, voluptuous body, and a tendency towards sedentary behavior. A balanced Kapha person has the memory of an elephant and will never forget.

Kapha is the archetypal Earth Mama who represents motherhood, fertility, and embodies the bounty of the Earth. These individuals are gentle and slow. Kapha people love to hug and are full of grace and compassion. They can be described as a “tortoise” type.

Kapha-dominant people like to keep a schedule; they enjoy routine and can be thrown by a change in plans. Kaphas have a great capacity for forgiveness and are capable of a deep sense of inner peace. Their reliability, stamina and loyalty are often noted by the people closest to them.

Kapha Out of Balance

When Kapha dosha gets elevated, then excess mass or liquid can start to cause problems. Imbalances connected to the element of Water such as congestion, excess mucus, edema, and weight gain can occur, as can Earth element issues like cysts, tumors, gallstones, diabetes, and kidney stones.

In the mind and heart, excess Kapha can make a person feel lethargy, stagnation, “stuck in a rut,” a lack of clarity, or overly attached, greedy and possessive.

What causes Kapha dosha to elevate? Exposure to Kapha’s qualities (in the immediate environment, in foods consumed, or in the environment of the mind) will cause Kapha to rise in accordance with the law of “like increases like.”

Kapha-increasing foods are heavy, oily and sweet, like dairy, fried foods, meat, cake and ice cream. Cold and moist climates, iced drinks, sedentary lifestyles, napping during the day and sleeping in a soft bed can all increase Kapha.

Kapha is most present in the early years of childhood when our bodies are focused on growth and building. Kapha is also high in the damp, wet season of Spring, when allergies often unleash a torrent of Kapha phlegm.

How to Pacify Kapha

The best “medicine” for Kapha contains its opposite qualities: light, sharp, fast, warm, dry, rough, and mobile. It is of the utmost importance for Kapha types to engage in plenty of exercise and movement, avoid cold and heavy food, and cook with warming spices like ginger, chilis and black pepper.

When the mind becomes heavy or sluggish, moving the physical body often helps. Keeping the mind focused and active can take more effort, and require more enforcement – recruiting a partner to help keep momentum going can be a huge benefit, as can finding a motivating reason that speaks to the Kapha’s heart.