Turns out I know even more people in this enormous, anonymous city than I thought. Sunday afternoon I took a taxi from Daniel’s apartment in to Mumbai proper, about a 45 minute drive south, to meet up with my friend Aditya’s parents. As my 18 month old niece Koruna says, I felt like a Big Girl, heading off by myself into this roiling mass of activity. Daniel had prepared me well for the taxi: “The meter is on the outside of the cab, on the passenger side, so the driver will reach over to the outside of the car to turn it on. When you get to your destination, the meter will say a number and the driver will hand you a card with a grid that shows all the numbers and the fares that match up so you can see the appropriate fare- unless it’s an electric meter, and then it will just say the fare. And there is no tipping.” Got it.

Miraculously, I managed the taxi on my own and found the right flat. Aditya’s parents Rohini and Shekhar were waiting for me with lunch on the table – the most scrumptious meal of green pepper, onion and spices, peas and potatoes, and roti (thin bread cooked on the stove top), followed by rice and yogurt. Rohini explained the finer points of using your hands instead of utensils, a lesson well needed. 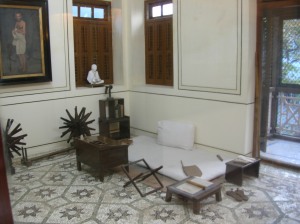 After lunch, Shekhar took me to a very conveniently located tourist attraction – Mani Bhavan, the home of Mahatma Gandhi when he was in Bombay, is literally across the street from their flat. The three story house now holds a library, many historically significant letters and documents, and a sweet little display of figurines depicting important moments in Gandhi’s life. It felt right to pay homage to Gandhi during my first days in this country, and fortuitous that such a site emerged in my path without me even seeking it out.

When we returned, Aditya’s brother’s wife Heetal had arrived.  I liked  her instantly. She took me with her to buy some candles a few blocks away. It is fun being someplace so different (and being in an open enough state) that a simple errand becomes an exciting field trip, an opportunity to simply see things around you. On our way back, we passed what looked like a nondescript office building with a small crowd at the entrance, and I could hear chanting inside. When I asked, Heetal said it was a temple. “Do you want to go in?” she asked. I hesitated, nervous about looking out of place, but realized this was only the first of many times that that feeling would arise in the coming weeks. “Absolutely,” I said.

Inside, about 25 people were standing in a small room facing a murti (a sculpture of a deity) ensconced in glass in the middle. I stuck close to Heetal’s side as many pairs of eyes followed our movements. At the edge of the group, several women moved together to make room for us and waved us closer so we could view the murti more easily. It was a beautiful goddess, with flowing colors and flower garlands around her neck. I didn’t recognize which form of the goddess it was, and Heetal explained it was Ambe Ma, also known as Ambe Mata. We stayed several minutes, and when Heetal started moving towards the door an older gentleman brought us each a flower from the murti as a blessing from the goddess.

That evening, Aditya’s parents had arranged a dinner party inviting Aditya’s cousin Sanjay, whom I had met at Aditya’s wedding, and a couple I used to know in Boston, Maya and Dunigan, who unbeknownst to me had relocated to Mumbai. Dunigan works at Bain as a consultant and Maya just gave birth to their second child three months ago. It was wonderful to see some familiar faces. We caught up over another delicious meal until my jet lag kicked in and my eyes started closing.

The next morning, Rohini planned to take me to several tourist sites, but their driver had not shown up. Neither Rohini nor Shekhar drive these days (a wise choice, I think, having now seen the Mumbai traffic), so they hire a driver who is on call for them during the workdays. Rohini called her brother and was able to borrow his driver for the morning, so we headed off to the Hanging Gardens, which overlook the Arabian Sea. Next, we drove down to the Gateway of India, a large Arc de Triomphe-style arch on the waterfront built by the British to commemorate the visit of King George V to India in 1911, the only visit of a reigning British monarch to India. Ironically, the last British troops to leave India in 1948 exited through the Gateway too. The Gateway of India is right next to the Taj Palace, the high end hotel where terrorists targeted tourists in the November 2008 bombing. We went into Victoria Terminus train station, drove past the Rajabai Clock Tower and drove down Fashion Street. In honor of my brother Ian’s visit back in 1999, of which Rohini happily recounted many stories, we went into an art gallery that she had sent Ian to.

I am reminded how much energy it takes to simply take in sights, to observe, to feel the movement of countless bodies around you. It is no surprise, then, that with jet lag and visual overload, I thankfully fell into another nap that afternoon. Hopefully by now, I am finally caught up on lost sleep.

6 thoughts on “A very full weekend” 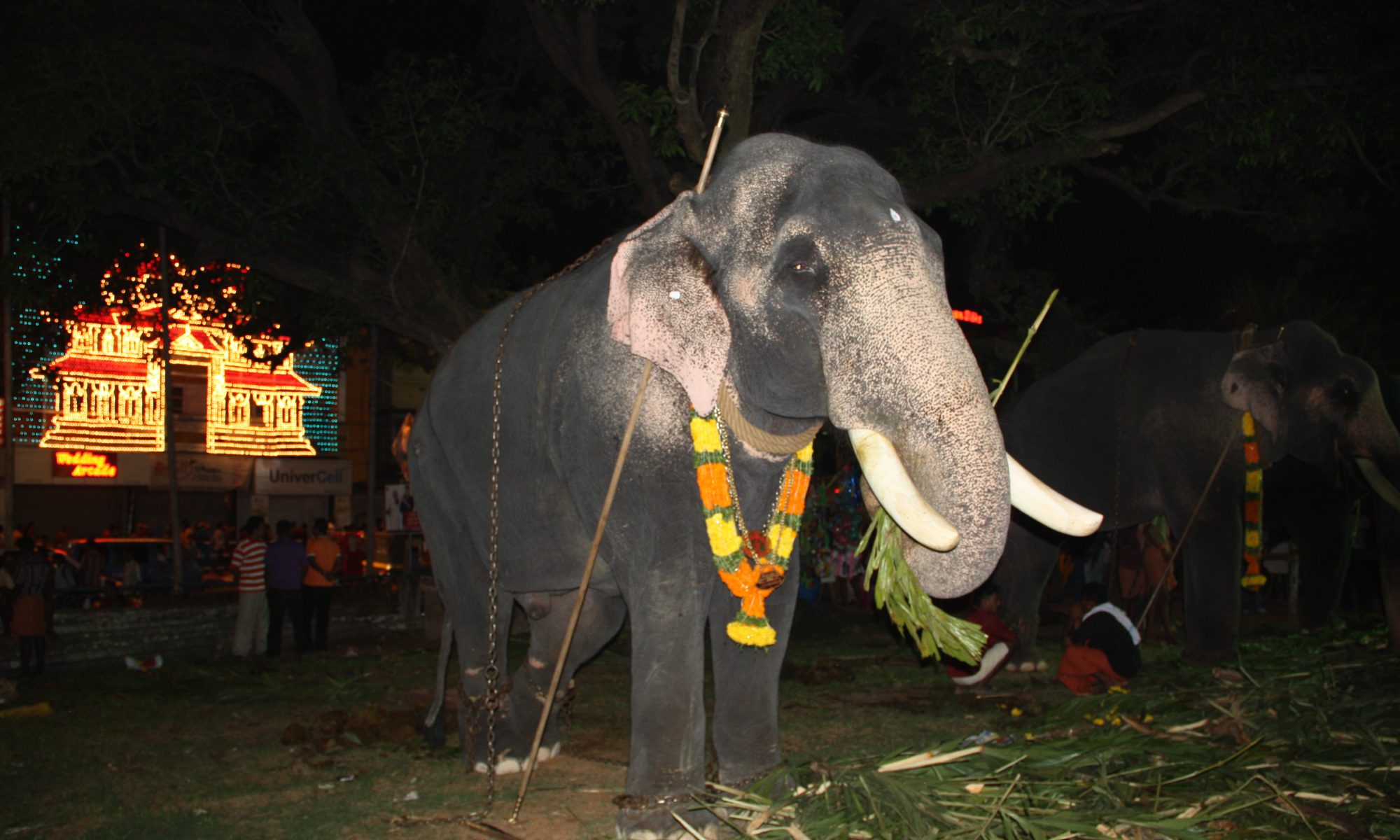